It will be a great sunny day today - a perfect one for a mountain bike tour. The weather allows for a longer tour, so today we will go to Elmau and then back to Lake Badersee. Biking alone would make for a half-day trip, but you shouldn't forget to calculate all the nice places to stop on the way...

We start directly from the Hotel am Badersee in the direction of Hammersbach and Garmisch-Partenkirchen. In Hammersbach (that we locals call 'the little Siberia', as in winter the spot has no sun for 3 months) we start on our 'biking Autobahn' that brings us to the ski stadium. Here you can make a brief stop and take a look at the referees' tower of the Olympic ski jumping hill. From the stadium we follow directions to Mittenwald and here comes the first big uphill section to Klais. Across 3 kilometers we should ascend 150 vertical meters. But it's worth the effort: the view of the Alpspitze, the Zugspitze and the Waxenstein wall is amazing. 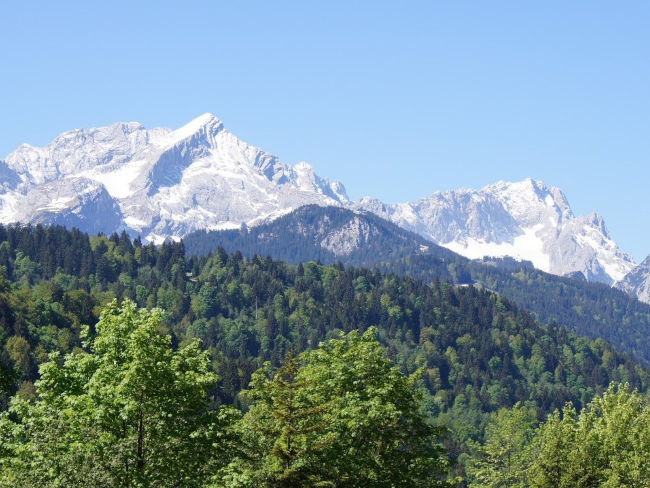 We follow the blacktop road past Kaltenbrunn and further to Gerold and Klais. A brief detour to Lake Geroldsee is a must. The picturesque small lake with a panoramic view of the Karwendel Chain in the background can be found in a small trough. The little beach on the lakeside is very popular in fine weather. 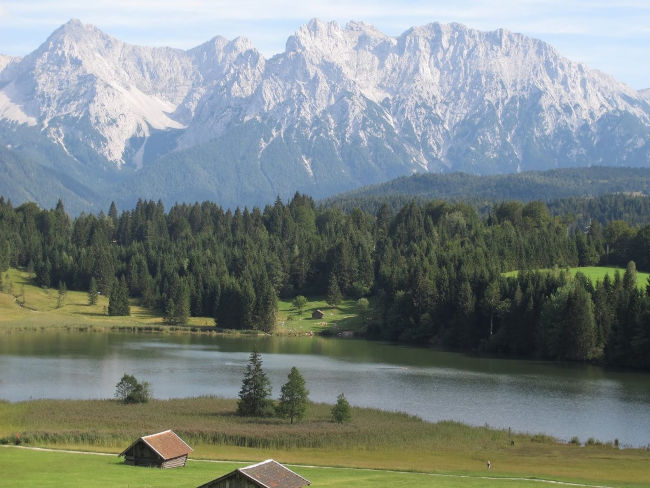 In Klais we look for the sign to Schloss Elmau. It is located on a toll road, which is however free for bikers. The road goes slightly uphill, untill we reach Kranzbach and are awarded with a great view of the Karwendel Chain. Over 100 years ago the British aristocrat Mary Isabel Portman established an English country mansion at the foot of the Zugspitze as her own personal resort - Schloss Kranzbach. It's a public hotel nowadays. 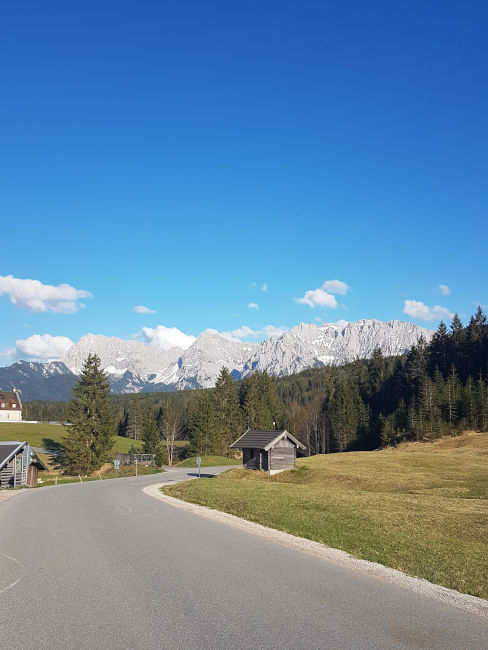 Up to this point we already have 500 vertical meters and 22 kilometers behind us. We follow the quiet toll road in the direction of Elmau and meanwhile enjoy the downhill race that lets our thighs take a brief rest. 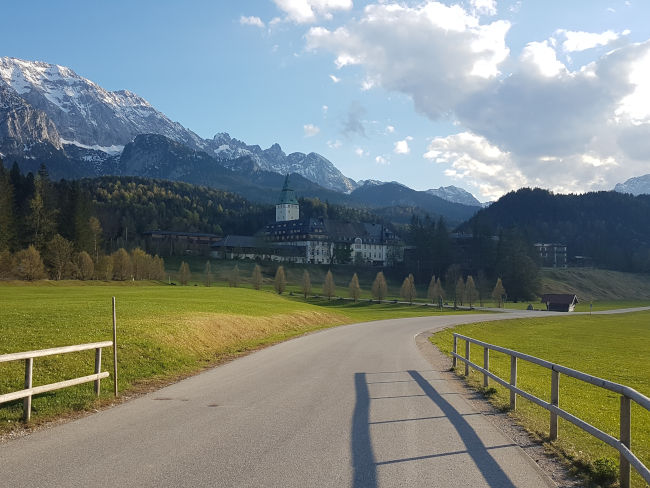 The elegant and internationally famous luxury hotel "Schloss Elmau" lies before us enthroned on the pre-alpine hills. The Elmau Castle was constructed in the times from 1914 to 1916 and later gradually enlarged, until in 2005 a fire destroyed two thirds of the ensemble and it had to be partly demolished and rebuilt. Since 2007 it opened again as a 5*S hotel and hosted the G7 forum in 2015.

Starting from Elmau, the way gets increasingly picturesque and takes you through lush meadows and pastures, currently occupied by the kettle. The animals are waiting for the begin of the summer season that they normally spend high in the mountains, after the snow melts away. 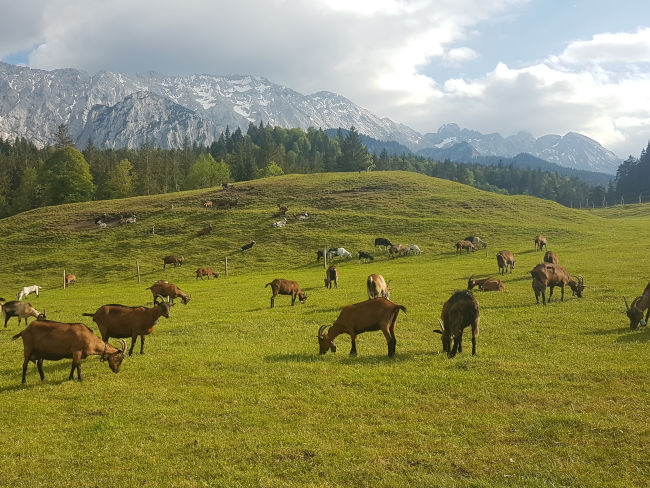 Our next goal is the small steep slope that leads us up to the Schachen parking lot. From there we take a sandy road to the Ferchental Valley and then go further uphill (15% gradient), until we come on the hilly road in the direction of Hintergraseck, a small alpine settlement. 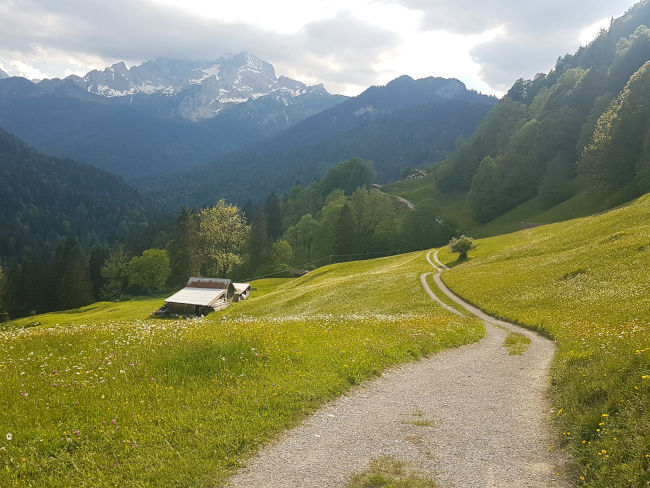 From this point you have an amazing view of the Reintal - this is the name of the upper and lower valley of the Partnach River between the Zugspitzplatt Plateau and the Partnachklamm Gorge. The valley was laid by the Reintal Glacier during the Wurm glaciation period and later in the Holocene widened by the river, after the glacier drew back to the edge of the Schneefernerkopf. 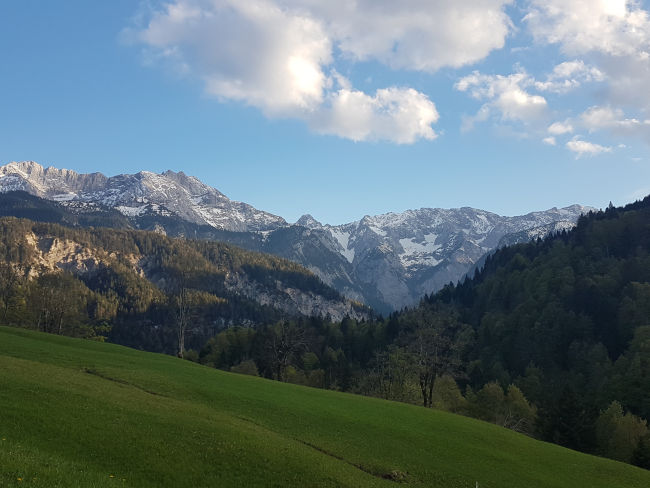 Now it goes downhill in the direction of Graseck and "Klammhaus an der Partnach" (this is a guest house next to the Partnachklamm entrance that the locals also call "Partnachhaus"). 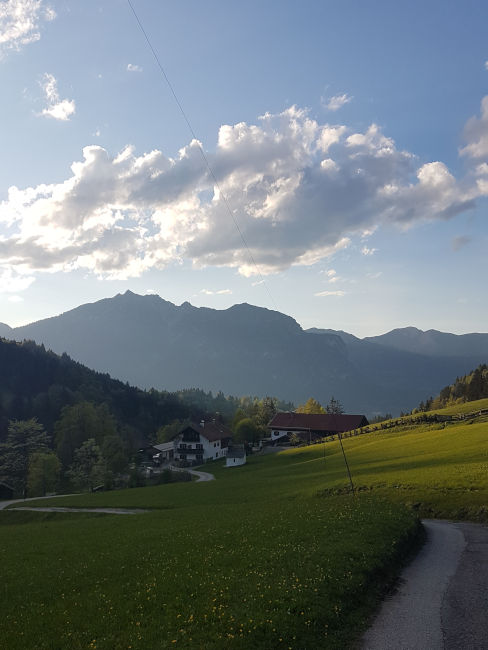 From here begins an extremely steep blacktop downhill slope with a 35% gradient. A sign suggests that bikers should dismount. Only courageous and experienced mountain bikers can master this slope with its crazy serpentines. But look out: the steepest part is at the end. A small tip: interval braking extends the life of the brakes and prevents them from 'glazing'. After you manage the slope, you can award yourself with a coffee at the "Partnachhaus", before you reach the ski stadium and then take the same way back to Lake Badersee.

Looking for accommodation for your tour?